That’s right, we’ve found out that our babies are going to be two identical twin boys. Gwen and I actually found out last Thursday, but I was sworn to secrecy by Gwen who wanted to inform a few…VIPs, shall we say, personally. We had gone back and forth about whether or not we were going to find out the sex of the babies before birth or not. The traditional “Surprise!” approach was certainly appealing to both Gwen and me. In the end, several factors militated against going that route, however. First, the fact that they were twins meant that we will have to buy twice as much stuff, in general, than would be normal. Second, we are going to be having them in Boston, which means that the showers will not be held locally. So, for those reasons (and, I admit, a certain lack of patience on our part!), we went ahead and had the doctors tell us. We were a bit surprised…female identical twins are more common, so I think both of us went into the appointment with the assumption they would be girls. Oh well, now the name selection can begin in earnest!

So, other than that, I don’t have much else to report. I’ve been working off and on a few of my models. If you remember from some of my previous posts, I’ve been working on some models for Firestorm Armada. I’ve gotten all the painted markings done on the carrier and shield cruisers. This included some free-hand work for the carrier. I have since given them a coat of Glosscoat ahead of getting their decals: 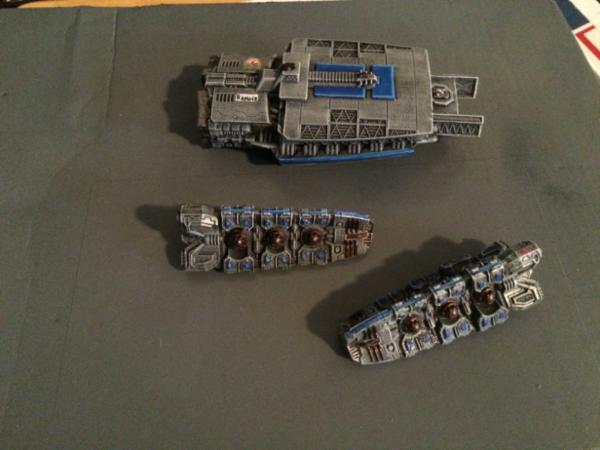 As for the rest, I’ve started the washing process on them: 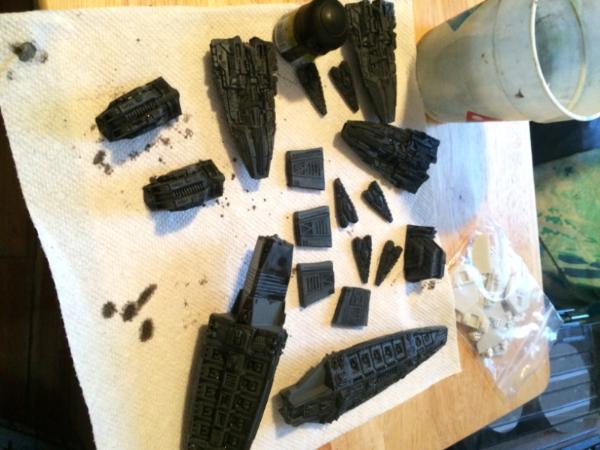 In addition to this little bit of modeling, I’ve been playing a couple of games on my PC. World of Tanks is still going strong, and I’m really enjoying the Pershing I recently unlocked. I’ve also been playing a lot of Star Trek Armada 3, which is a Star Trek conversion mod for Sins of a Solar Empire. I have mentioned this mod here before, almost a year ago in fact, but it was recently updated to include the Cardassians and the Dominion. I tell you, this thing pushes each and every one of my considerable number of Trek geek buttons! As a result, I’ve picked it up again and I am now well and truly hooked. I will have to finally sit down and write a more detailed post about it that I’ve been meaning to do. Until next time…